There was a time when man was free and his world made sense.  A man hunted.  Killed.  Fought.  Spoke.  Fucked.  Then slept – without dream or interruption – by the raging fire he made.  Man never thought to ask permission.  He never worried.   Regret didn’t exist, nor guilt.  His sense of responsibility never strayed beyond the province of himself.  Man sought his own fulfillment above all else and chased it everywhere.

On his mad quest, man roamed the wild ends of the world, while his desire ran alongside, like a loyal wolf, unchecked, unrestrained, and deadly, devouring all experiences and tossing them away like meatless bones.  It was a ravenous linear existence and not once did man stop to surmise his wake of destruction and waste, nor did he look to see where he was going or where he had been.  The pressure of time spurred man towards another pleasure that needed exploring, another impulse that commanded his full attention.

Man never asked himself or others what the search meant or what it was for because he hadn’t thought to care.  Man lacked the capacity for self-reflection and it was wonderful and liberating.

Women did not trouble their men with questions about intent, motivation, and reasoning because they knew better than to look for answers where there were none.  Early woman accepted their man as the brute, ungoverned beasts of madness the Creator had made them to be, and out of fear and awe, acted has man’s handmaid to his desire, indulging any and all of his whims with silent acquiescence.

Man was a man.  It was terrifying, ordered and good.  And yet time, nature, and entropy loosened his grip on his world.

Without his blessing and under his fingertips, the world evolved, bringing about social norms and expectations that hemmed the length and depth of his forays into the wild.    Suddenly, man returned from the hunt and woman wanted to know where he had been, what took so long, why he hadn’t checked in and if he had been smoking.  Instinctually, man dashed these silly women’s brain out against a round stone, found another vagina, and fucked it.  He solved his problems in the only way he knew how – by destroying them and moving on.

This worked for a time, until the populations of women dwindled and man’s depravity increased to the point that he looked upon his own livestock, his rolled up socks, dead fish, and his fellow man with an inquisitive raised eyebrow and unbridled longing.  It was an ugly transitional time for man because man began to see the dangers of his unfulfilled desire and the bizarre holes he would explore to quench it.

The remaining woman banded together, stubborn in their persistent demand for an accounting of man’s thoughts and actions.  Man became confused, disorientated, and for the first time, afraid.  He was lost, caught between his desire and extinction.

He acted.  That is what a man does.

Man double down on the fucking and killing, waging war against the evils that plagued him.   Yet, the paradox scrambled his mind.  How does a man wage war against the very beings he wishes to fuck?  He will win but was winning best?  He fought the contradictions within himself using the blunt tools of his past.  He raged and swore and abused everything.   Finally, he herded the remaining women of the earth into a pen, closed the gate, and realized that with one stroke of his ax, he could rid the world of all women and silence their loathsome questions that had stained his perfect world.

He paused for a moment and imagined the world without woman.

From behind the bars, the women protested.

Why are you doing this?  Why is this so important to you?  Explain yourself.

And for the first time in man’s history, he turned to his fellow man, looking for an answer.

Man returned with the only answer he knew, “I don’t know.”

He cowered in the face of his reality.

Involuntarily, his gaze returned to the women locked in their cage and heard their questions.

He didn’t know.  But in that moment man saw the world without women and he retreated from the bearded man-sex, the farm animals, the crusty tube socks, the microwave pizza, the mattresses on the floor, and the crippling sadness of it all. He saw the womanless world and he saw himself in it.  It was too much.

Out of fear, he enslaved himself to woman and the questions he could never answer.  It was safer this way.  This arrangement afforded some level of protection from the destructive power of himself.

But before man opened up the gate and freed the remaining women, the last free men gathered around the shores of Lake Dunmore, stripped down, and washed themselves, using the glacial water to rinse all their base desires, lusts, unquenched thirsts, and animalistic instincts away so they might have a chance at successfully leading their lives of dutiful servitude to the expectations of woman and the new society they imprisoned us in.

If you believe the legend, then these baptismal waste waters, full of life-sustaining minerals and raw organic man material, settled in the bottom of Lake Dunmore, and brewed a primordial soup that spawned the Lake Monster.

The Lake Monster is terrible and destructive and evil.  He is also harmless and misunderstood.  He is everywhere and nowhere.  He lives on everything man left behind as he entered the modern world and weighted himself down with expectations and responsibility.

He is as real as your ability to believe in him.  We assure our kids and our wives that monsters like him don’t exist in the rational world and if they did, we would hunt it down and kill him.  Our homes, our marriages, our society can’t live with monsters like that, so he lives alone, or doesn’t, at the bottom of lake. 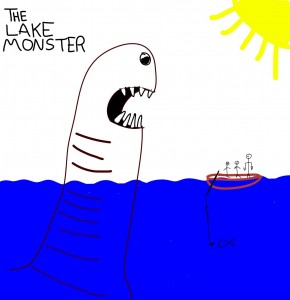 The only record we have of the Lake Monster are his stories, tales from a bygone age which he maniacally scribbles down in his underwater layer as an effort to preserve himself against the changing times.  These stories keep him sane and society safe.  If he writes it down, his terror safely stays on the page and doesn’t spill into the real world above.  Sometimes his stories float up from the abyss and get published here.

We don’t know who he is, what he wants, why thinks as he does, what his purpose is.  We don’t spend a lot of time analyzing his writing or adopt his thought process as our own.  It just is.  Out of respect for lost customs, we don’t ask the Lake Monster stupid questions.  We let him be.

Throw your questions into the lake where they belong.

Our stories are based on our lives but some contain sprinkles of fiction to enhance entertainment value (we’re sellouts) and/or whatever “point” we may be trying to convey (we’re not complete sellouts).